1. Reasons to Cause Blurry Images

In this post, only blurs caused by lens imperfections and camera shake are discussed. 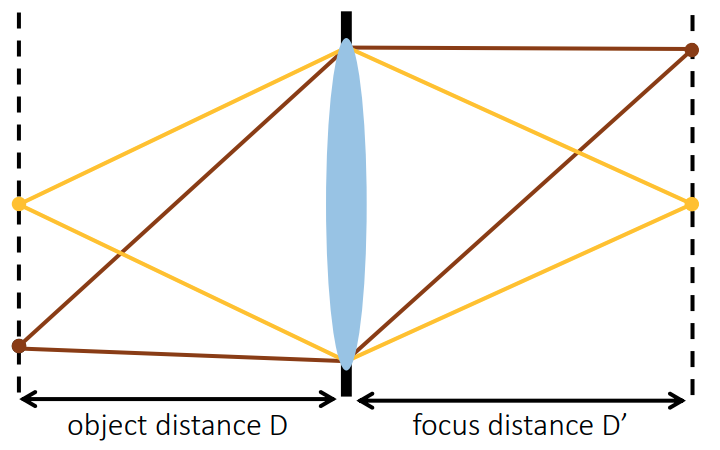 The image sensing model is defined as

where $y$ denotes an observed blurry image, $x$ is the latent image and $b$ represents the blur kernel. $\ast$ denotes the convolution operator.

First of all, we consider the smplest case that noise is free in the image sensing model, i.e. $y = x \ast b$. If the kernel information $b$ and the blurry image $bm{y}$ are given, how can we recover the latent image $x$? (Fourier transform)

Assumption: 1. the latent image and noise are independent. It means that $\mathbb{E}[XN]=\mathbb{X}\mathbb{N}$

To solve this problem, take it detivative with respect to $H$ and set it to zero. We obtain:

Apply inverse kernel and do not divide by zero 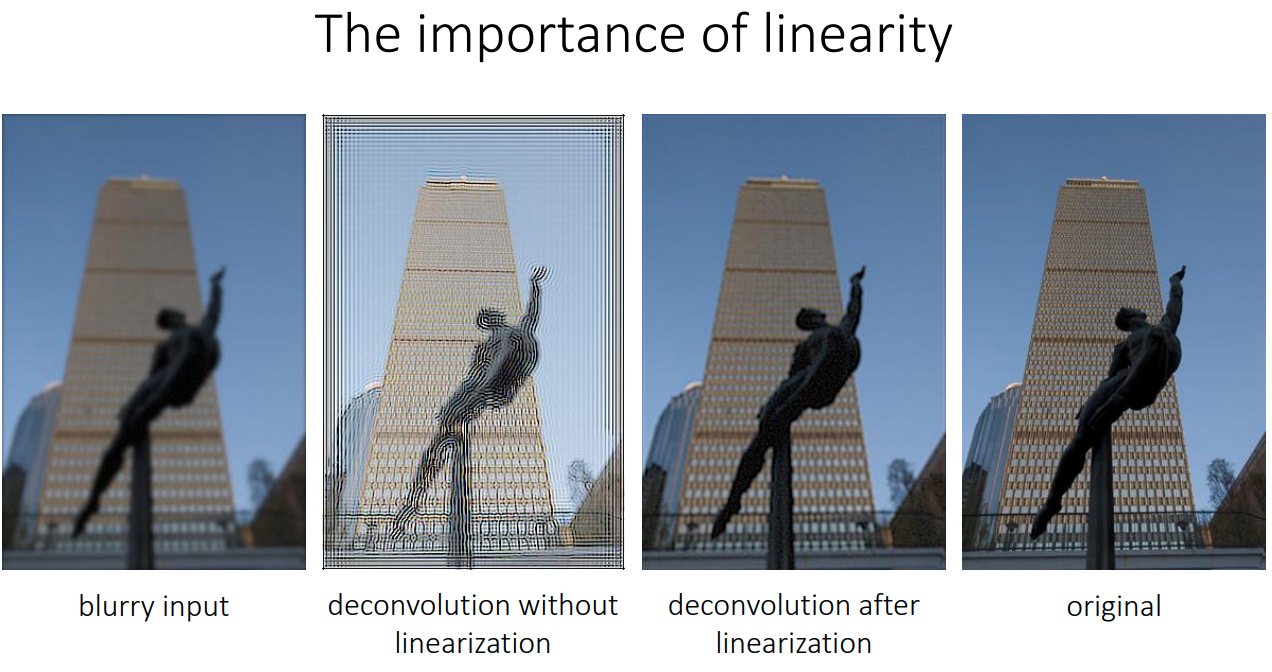 Such a deconvolution problem that they are ill-conditioned. The optical low-pass filter removes high-frequency information in the original image. Given a PSF or OTF of an optical system, it can be predicted which frequencies are lost. Such an ill-posed problem usually has infinitely solutions, and thus prior information is required, e.g. smoothness, sparseness, sparse gradients, non-local priors, and many others. Without any prior information that is additionally imposed on the estimated solution, it is generally impossible to recover “good” images, which sometimes contains noise and ringing artifacts.

A general formulation for the image reconstruction is

Take an example of the gradient regularization. Generally, for the anisotropic case, the regularizer is modeled as $\Gamma(x)=\lambda\Arrowvert Dx\Arrowvert_{p}$, with $D=[D_{x}^{T}, D_{y}^{T}]^{T}$. $D\in\mathbb{R}^{2M\times N}$ represents the finite differences approximation of the horizontal and vertical image gradients:

where the operator $vec(\cdot)$ vectorize a 2D image and $d_{x}$ and $d_{y}$ are the convolution kernels representing forward finite differences.

The formulation to the deconvolution problem with TV norm gradient regularization:

we can rewrite the problem formulation as

the augmented Lagragian function is:

the iterative updates rules are:

For $x$-update, this is a quadratic program:

we expand it, take it derivative with respect to $x$, and set it as zero. We can get the solution:

or using a large-scale, iterative method such as gradient descent, conjugate gradient, or the simultaneous algebraic reconstruction method (SART).

To invert the above equation analytically using inverse filtering, the convolution operation in the spatial domain is converted to the multiplication operation in the frequency domain. We can see that $Cx$ and $Dx$ can be expressed as the convolutions, i.e. $c\ast x$ and $d_{x/y}\ast x$. Therefore, we can quickly solve the problem in the frequency domain:

which gives rise to the inverse filtering proximal operator, which applies only operator and directly obtain the solution:

For the $z$-update, this is a LASSO problem, and we can directly get an analytical solution. The the proximal operator is

that can be implemented very efficiently.

this is known as the group lasso problem.

The way to update $x$ and $\mu$ are the same as above, and the only change is the $z$-update, which is

The corresponding proximal operator of $g(z)$, the group lasso, is block soft thresholding. The z-update rule then becomes

If we only know about the measurement, i.e. observed blurry images $y$, can we recover the unknown image $x$ and kernel $c$?

Due to the ill-posed nature of the deconvolution problem, prior information plays a significant role when only observed blurry image is given. 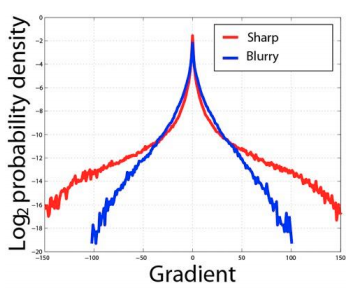 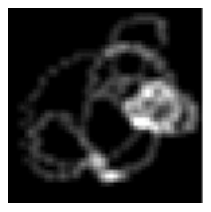 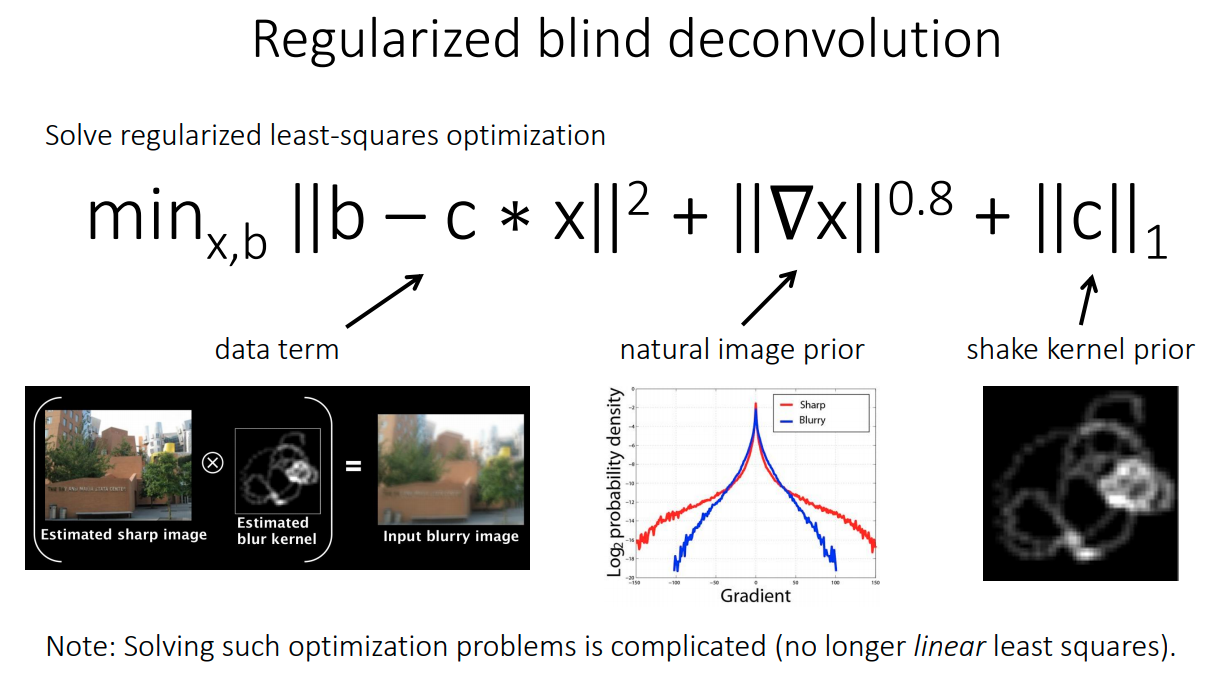